You can read Part 1 here.

PART 2: THE NIGHT IS DARKEST

There was a silver lining to my publisher’s rejection of Exceptional – after all, it’s the reason I’m writing this story about how I self-published it! It meant I was legally allowed to approach other publishers.

As I explained in a blog post at the time, I could no longer rely on a good faith-based relationship though; I had to make the best possible first impression wherever I took the manuscript. I was also at a disadvantage given the manuscript was for a sequel, and I had no delusions that a publisher would be likely to accept a sequel that the first book’s publisher didn’t even want.

So I decided to have my manuscript assessed by a trusted contact – Daisy Coles from Coles & Lopez, who I actually worked intensively with on Watched. I knew there was no one else I’d rather get an assessment from, and as I expected Daisy gave me heaps to think about when it came through. This was my first taste, however, of the new challenge that would characterise my journey; the financial cost of publishing. The assessment wasn’t excessively priced at all but it was the first time I had really needed to spend any money. Up until this point, I had had the privilege of things like editing and proofreading being paid for by the publisher. As I would come to find, the world of publishing isn’t cheap, and I’m certainly very lucky that I’m in a position that I can afford some of these costs – I know many other writers aren’t.

As I mentioned in Part 1, I was very happy with the finished draft of Exceptional, and the manuscript assessment just took it to the next level. There are so many improvements I made in direct response to the assessment, but some examples included:

Towards the end of 2016, with my new and improved manuscript complete, I was ready to approach other publishers.

My first choice was Steam Press, a publisher that specialised in speculative fiction such as science fiction and fantasy. I also happened to know the founder through previous work. As a small independent publisher, however, their capacity was quite limited and, although they gave me some encouraging feedback on the manuscript, they didn’t have the time to pick it up.

I tried others throughout the course of 2017. Mākaro Press, based in Wellington, politely informed me they don’t publish speculative fiction. I never received a response from the big publishers like Harper Collins or Allen and Unwin, nor from relatively new Auckland-based publisher One Tree House. Oratia, another publisher based near Auckland, returned my manuscript with a very nice letter informing me that they enjoyed it and considered it had promise, but that the Young Adult market was simply too hard to break into, especially in Aotearoa New Zealand.

My last real hope was Fox Spirit, the small, independent UK-based publisher who produced the Pacific Monsters anthology I contributed to. I figured there was nothing to lose in submitting the manuscript to them too. Again, due to their size and limited capacity, they were unable to take it on.

By the time I heard back from Fox Spirit, it was early 2018. I had searched for publishers for over a year, writing cover letters and plot synopses, waiting for months for each of their replies. There are probably plenty of others I could and should have tried, but I was beginning to accept what I had assumed was reality anyway: one, there’s little market in Aotearoa New Zealand for speculative fiction; two, it wasn’t likely that a publisher would pick up the sequel to a book another publisher had the rights to. I’m sure it’s no surprise that I was feeling pretty demoralised by this stage. I had kept my expectations as low as they could get, but the constant rejection was tough to deal with.

Throughout this time, friends and whānau were often asking me about when the next book was coming out, and I would be honest that my publisher had declined to take it so I was trying to find another one. I was fine being upfront about this but at times talking about it did get draining; well-meaning people would tell me to get on with it, to hurry up and get it out, to try this and try that, not really understanding the challenge I was up against or appreciating the effect that this prolonged sense of failure was having on me personally. And, with the benefit of hindsight, I think that effect was much more negative than I appreciated at the time.

Almost reluctantly, I began to turn my mind to self-publishing, which to me had always seemed like this grim, shameful concept synonymous with failure. There was a stigma attached to self-publishing that I thought was unappealing, and I had long felt that if I had to resort to self-publishing, it was basically confirmation of my failure as a writer. Much of my resistance to self-publishing, too, was that I had no idea how to do it. This was a time where, due to the past year of repeated failure, I really lacked confidence, and self-publishing was such an embarrassing notion to me that I was too afraid to ask for help to do it.

On my own, I came across a company that provided publishing services – Mary Egan Publishing. Basically they did everything from editing to printing to marketing, just as long as the author covered those costs. This, I decided, was what I needed. I got in touch and after some really informative, helpful engagement with them, they gave me a quote for a full package of publishing, marketing and distribution. The quote was, for me, quite a high figure and I would be lying if I said I wasn’t surprised by it. But I figured I was ignorant of the reality of publishing costs, something that was confirmed for me by an independent contact in the arts industry.

I spent quite a bit of time mulling how I was going to make the money. I simply didn’t have it myself, and I doubted I (as a relatively unknown writer, who couldn’t even get a publisher to accept his second book) would be successful in securing funding for this amount. To be honest, I started a Creative NZ Arts Grant application and gave up on submitting it – again, self-confidence was at an all-time low.

The last idea I had was to crowdfund the publication. I figured I would structure the donation system so that people could essentially pre-purchase the book; they could donate however much they liked, but if they donated, say, $25, they would automatically receive a book assuming the total target was reached. This seemed like the best way to raise the funds needed without having to empty my own pockets, as anyone who pledged would get their money back if I didn’t reach the target. I envisioned the campaign could double as a hype opportunity, which would only encourage more people to donate.

Before I launched it, I thought I should just take a sense check from people to test the idea. So I designed a little poll that I posted on my Facebook page asking for people’s opinion on it. All of the answers were positive. 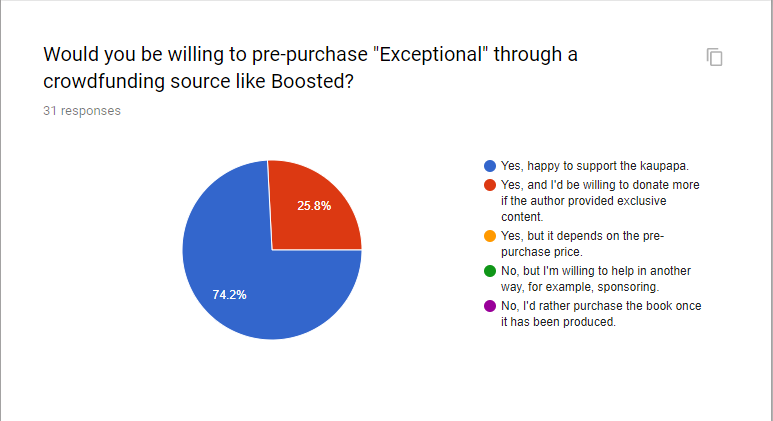 Everything changed, however, when I received a private message from J.C. Hart, another author. I knew of Hart’s name as a writer on 2018’s Te Papa Tupu, the same Māori writers programme I was on in 2012, but I had had no contact with her at all prior to this. In short, her message to me was that she had seen my poll, and thought that the costs I was talking about needing to raise to self-publish were, in her opinion, quite high. She explained that she had self-published several books for a fraction of that cost, and if I needed any advice she would be more than happy to help.

I responded immediately, and what followed was an absolutely invaluable series of emails explaining to me different avenues for self-publishing, recommending various services to me, and more. Being completely ignorant of this world of self-publishing, I asked her every dumb question I had and she generously answered all of them. It didn’t take me long to realise that self-publishing wasn’t this scary nor shameful thing, and that I could seriously do it on my own. Mary Egan Publishing would definitely have produced a quality book, and I did really appreciate all the kind, helpful, professional engagement I had with them. I am also certain that they could have taken care of all the marketing and distribution that I haven’t yet worked out how to do. But J.C. Hart showed me that there were other options out there that would simply be more accessible to me in my particular circumstances – I just had to put in the work.

It needs to be said: I simply would not have self-published Exceptional if J.C. Hart hadn’t reached out to me the way she did. Armed with a whole lot of options for self-publishing she had given me, I was ready to embark on the next phase of my journey.

I have made a little acknowledgement to J.C. Hart in the back of Exceptional, but I really can’t express my gratitude to her enough. Please check out her books and her blog at https://just-cassie.com/.

One thought on “The Story of “Exceptional”: Part 2”